Atrocity is complex not only through their musical variety, as they successfully combine various styles and sounds throughout the years, but also creating an imagery to go along with the sound, a whole world cinematographically structuring music in trilogies, series, and their anniversary film documentary that runs at film festivals. Lead singer Alexander Krull and guitarist Thorsten 'Tosso' Bauer honored our page with this awesome interview!

pdn: Greetings, Alex! Here is my usual curiosity, to begin with; is there any particular story behind choosing the name 'Atrocity' or was it simply appealing? How about 'Leaves' Eyes'? 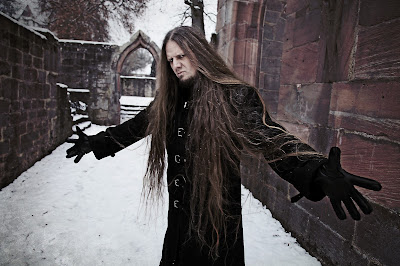 Alex: First of all I want to thank you for the interview! Our new album “Okkult” will be released soon, and we can't wait until it is released! I think "Okkult" contains many elements from our musical past, especially the very heavy stuff from our 1990's album releases but also "Atlantis". "Okkult" combines our roots with new musical ideas, and this is simply a new era for Atrocity after such a long history of challenging metal music! I love the whole lyrical background of the “OKKULT” trilogy! The lyrics relate to occult magic, mysterious places, conspiracy theories and mysteries that are still unsolved. Actually it's great to take the listener and ourselves on a heavy trip through the dark and mysterious tales, happenings and places of all times. Our band name has a strong connection to old history, too. The name “Atrocity” was born after we changed our first band name Instigators. It's inspired by Latin language. I wrote once a lyric for a song called “Eae atrocitates Neronis” - the atrocities of Nero. The idea behind the band name “Leaves' Eyes” is actually linked to Liv Kristine and mine honeymoon in Ireland, 2003, as we were already gathering ideas and inspiration for our first album. “Leave” is a word game homophonous with “Liv” and she has the most bluest eyes, deep like oceans. Moreover, as in Northern mythology, the tree, especially Yggdrasil, plays a vital role.

pdn: The Leaves' Eyes line-up is practically Liv and everyone from Atrocity. What is it like to have two active projects, especially if all of the members are involved in both? I guess it can't be too easy! 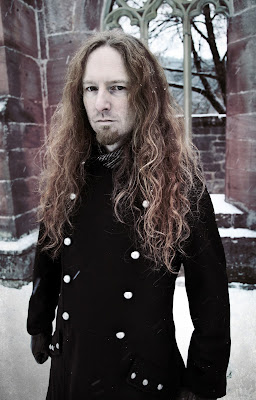 Tosso: The bands are very different. Atrocity is the more guitar focused band, while Leaves' Eyes is more focused on symphonic soundings and Liv's voice, just to mention one point. Leaves' Eyes has Felix on drums, whereas Atrocity has Joris playing. Sometimes we play with both bands in a row, which is quite demanding (laughs), however we all like challenges especially when the audience is head-banging and having a great time! Actually we are super busy because work never stops, studio, tours, studio with two bands. But it also gives you the opportunity to create and develop different musical ideas, which is very enjoyable. We chose to have two different drummers for Leaves’ Eyes and Atrocity, so both, Felix and Joris can concentrate fully on the drum needs of each band. We had some cool shows in Spain for example, playing with both bands. So Joris and Felix teamed up as each others stage tech. That's very cool!!

pdn: You and Liv are married with a child. How much does the family life cross paths with the musical part, since you are both successful musicians?
Alex: Both of us, even before we became parents, had made up our minds about how to combine family life and musical profession, including touring. The best decision we ever made was to build our own studio, “Mastersound Studio” where we compose and record as much as we can. Our son, Leon, has already seen many countries and practically grew up with all this, without any problems. Step by step we have found great solutions and an optimal schedule to our highly interesting, but indeed busy, lives. Liv and I both see it as a privilege to be full-time musicians and composers, having jobs we really like and perform with heart and soul. Apart from this, being parents is for my wife and me the greatest luck in the world.
pdn: Back to Atrocity; how did it all begin, what were your initial influences? How did making music start for you in the first place, any hero musicians you've had growing up?
Alex: We formed Atrocity already in 1985 and became the forerunners of the German Death Metal scene haha. I remember dirty rehearsal rooms, shitty equipment, fantastic shows in small rotten clubs haha. I was into hard music since I was a young kid, 6 six years old. As school kids we formed the band then. From the beginning we were a big part of the Underground movement of extreme music, too. Atrocity and I was there myself when it all started! We have been in personal contact with most of the bands from Morbid Angel, Pungent Stench, Immortal to Entombed. By the way I organized the first Euro Death Metal Festivals and our first Atrocity Euro tour together with UK legends Carcass in 1990. Great times! When we did the work for great retrospect on our “Die gottlosen Jahre (The godless years”) last year, a lot of the memories came back. The golden Underground times, us being tape trades but also very passionted musicians at the same time! Back then we wanted to support each other, all the bands we were friends of, from Napalm Death to Entombed! Many of them were guests in my house. Nobody else wanted that kind of extreme music. A lot of musicians from these times give us great respect and great statements on that DVD, which is a great honor! These are some of the most unforgettable and special memories of our career. Many others involved in the project share the opinion. And over 80 interviewees contributed to the documentary! Some of the interviewees were truly touched. It was so honest and authentic. Nobody didn’t put lipstick on the pig. The anecdotes featured are the true-to-life stories of a metal band and about our crazy career. It was a big effort to get all the interviews set up and filmed. Several teams were filming all those interviews with different people from all over the world. It is a very special feeling, knowing that after devoting such a huge part of your life to a band, the hard work is immortalized on film and even gets such a feedback from all these musicians, journalists, fans and music biz people. To be honest, who would have thought that a German underground band would one day tour the world and even enter the charts! 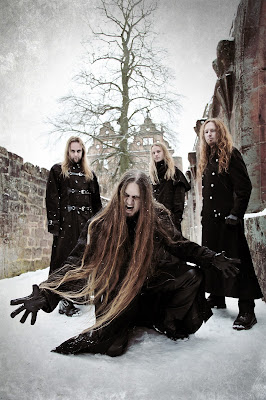 pdn: The band clearly followed a lot of different musical paths and popped around between genres, making the sound quite unique and hard to define. Do you consider that the experience with different sounds was a key factor in musical evolution and individuality?
Alex: Some call us the „metal chameleons“ because we combined so many different music under name Atrocity, and crossed borders no other metal band has gone before, too. We were always looking for new challenges and ideas. Let's see it like that: I like the idea to be in a band which is able to deal with several musical concepts and styles. What is a better: A movie director, who does only horror movies or a movie director who is able to do horror movies, blockbusters as well as action or fantasy movies? Just like guys like Peter Jackson or Sam Raimi. Well, besides all experimental stuff we never gave up our heavy side or denying it! We played the heavy stuff live, classics like “Necroplois”, “Blut” or “Fatal Step” from our first albums have been in our live setlist as you can see on the Live in Wacken DVD. This band certainly stands for creativity, perfectionism and depth. To put our compositions and albums in an over-all view, past to present, I think "Okkult" contains many elements from our musical past, especially the very heavy stuff from our 1990's album releases but also "Atlantis". "Death by Metal" is the best example for that: Our tribute to Death Metal actually contains the main riffs of the song, which I wrote originally in 1991 and also brand new riffs! So "Okkult" combines our roots with new musical ideas, and this is simply a new era for Atrocity after such a long history of challenging metal music!
Tosso: I absolutely think so. You have bands in metal that play the same stuff over and over again. We always tried to come up with new ideas and new challenges for ourselves, instead of releasing one album after the other sounding the same. Of course we took a high risk with that attitude but, being passionate about our music, we took that risk.

pdn: And did the numerous line-up changes in the band's history have any effect on this musical variety?
Tosso: Of course every band member brought in some new influences over the years, but the core of the bands was, regarding the fact Atrocity exists for such a long time, very steady. I think it has more to do with the interest in and excitement about music. 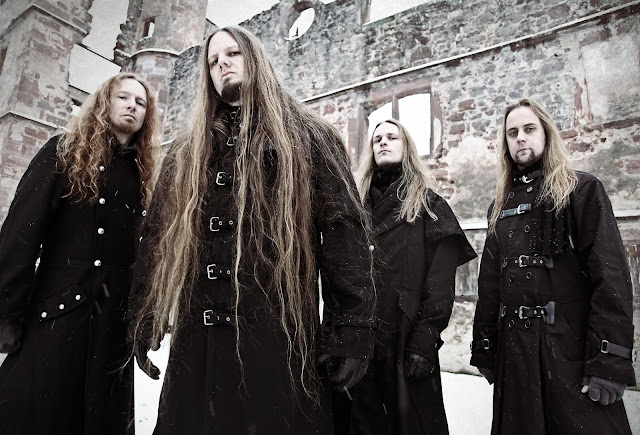 pdn: You've toured with many other great bands - who were your favourite people to tour with and why?
Tosso: There were so many!! Haha. Of course I have special memories about my first tour, which was a five weeks european tour, together with Obituary and Pitch Shifter in 1994. I was 19 and had just finished school. That was fucking amazing for me. Just a few weeks ago Obituary played here in our area and of course we met, partied and talked about those great days and moments. It’s really crazy! Just think about all the people we’ve met on the road...We have toured together in almost 40 countries and played with tons of bands, for example Motörhead, Morbid Angel, Carcass, Entombed, Sodom, Deicide, Obituary, Cradle Of Filth. We also did a lot of festival shows in the whole world and were supported by bands that later got pretty known, like In Flames, Haggard, Theatre of Tragedy or Samsas Traum.

pdn: And also, who would you like to share the stage with, if anyone?
Alex: It would be a great idea to make a re-issue of one of the “Support the Underground” festivals I did back in the day, together with our mates of Carcass, Entombed, Pungent Stench and Disharmonic Orchestra haha Another cool idea would be to perform together with Laibach “Die Liebe” or to bring Diamanda Galas on stage with Atrocity. 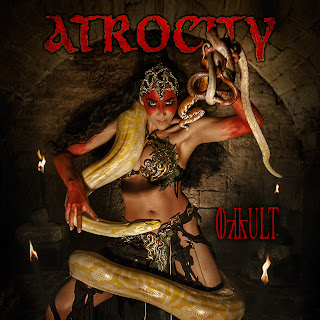 pdn: Any secrets for your amazing hair? :D (joke- well, half joke!)
Alex: Well, I guess it's due to the good genes, my father is turning 85 and still has thick hair, so no worries haha. My wife Liv cuts it here and there, I don’t like it when she does it haha. People actually ask me always for advices, and it's a simple answer: Don't cut your hair, switch hair products. My son is about to break the record, though: he is nine and his lion's mane has already reached his waist, for the second time in his life!

pdn: Thank you so much! Anything you would like to add for your fans, friends? :)
Alex: Thanx for this interview. Greetings to all metal heads! Join our treasure hunt!
Tosso: Thanx! Check out our new record, its well worth!!